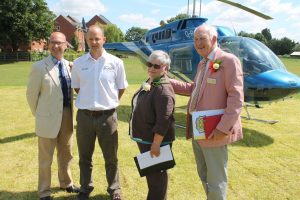 Stuart Jones, Ridgway Rentals’ MD, was only too happy to agree when asked again this year to treat the ‘Oswestry In Bloom’ judges to a helicopter flight

Judges David and Lesley Pritchard and Mark Wiltshire, vice-chairman of the Heart of England in Bloom took to the skies with Stuart in the Ridgway helicopter from Oswestry School for an aerial view of the town.

They were all thrilled to be given such a treat which was a total surprise to them! 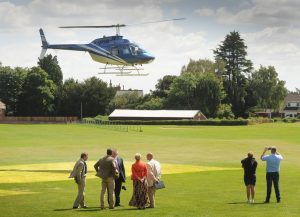 Lesley Pritchard, said: “A highlight for me was flying over the hillfort – I had no idea Oswestry had a hillfort. I was still saying wow when I got out of the helicopter. Oswestry is a gem, there is so much going on and it has a real community.”

The judges will make their decision later this summer and the winners will be announced in September so we hope our help proves successful!