Ridgway Rentals recently sent a Komatsu 138 to a secret location in Stoke to try and find a lost Spitfire. The aircraft was lost during a training flight over Stoke, sadly the pilot was killed and a brand new spitfire was lost for 75 years. A local museum based at Sleap Airfield in Shropshire requested the use of a lorry and digger to recover the aircraft, it didn’t take long for Ridgway to offer their help and T Rex the bonneted union jack painted Scania was despatched along with a Komatsu PC138 excavator to retrieve the lost Spitfire. Under the watchful eyes of Stoke council officials and other archeologists the dig began. Very quickly aircraft parts where discovered and confirmed to be from a Spitfire, excitement increased with every piece, hopes were high to discover the engine, the only part normally left after a big crash. Sadly it soon become clear the engine and other large parts had gone, possibly recovered at the time of the crash.

The recovered parts were loaded up and taken back to the museum for display along with other aircraft parts, well worth a look and used in the recent TV program Home Fires. 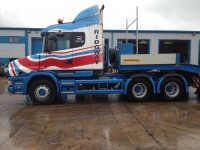 Best truck for the job 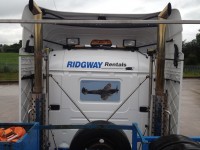 Only spitfire was on back of cab 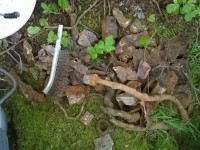 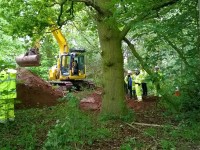 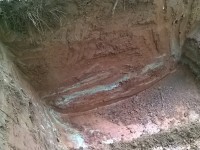 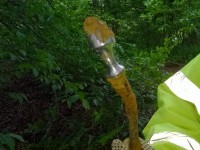