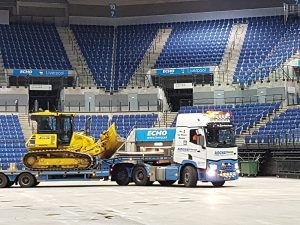 The arena was hosting the Liverpool International Horse Show at the time and our Komatsu D51PXi Dozer was hired for setting up the arena for the event.

The D51PXi features Komatsu’s intelligent Machine Control which, unlike competitors, is built into the body of the dozer from the factory – so no added components are mounted to the machine blade.

Also unlike other machine control, the D51PXi can run in automatic mode for the entirety of a job. Thanks to an enhanced Inertial Measuring Unit developed by Komatsu engineers, the D51PXi can actually maximize blade load and manage track slip all on its own from rough dozing through to finish grading. 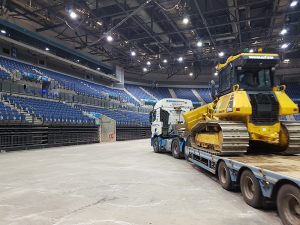 Sadly, the third year of The Liverpool International Horse Show ended in disaster when the New Year’s Eve Final show had to be cancelled due to the nearby fire.

The multi-storey in King’s Dock right next to the Echo Arena suffered major damage when it was engulfed by the blaze. 12 fire engines with crews tackled the blaze from Merseyside, Greater Manchester and Lancashire Fire Services. Approximately 1,300 vehicles were destroyed and even though the fire led to hundreds of people being stranded overnight, miraculously, no-one was seriously injured. More information on fire